The latest developments in the wide range of light weapons available to British troops operating in Afghanistan were put on display at the MOD’s Main Building in London last week.

The Memorial Courtyard of the MOD’s London headquarters was temporarily transformed into an arsenal as the Ministry’s Defence Equipment and Support section and their industry partners, who are responsible for the provision and management of the world-leading kit, showcased their wares

The spectrum of small arms currently in use by British forces which was on display included the hand-held Sig Sauer 9mm pistols, the latest Sharpshooter rifles, long-range sniper rifles, .50-calibre heavy machine guns, and some new weapons that are still undergoing trial.

Displayed alongside the weapons themselves was a range of the latest complementary accessories, including optical sights of varying magnification, image intensification (II) or ‘night vision’, and thermal imaging (TI) technology, and even a man-portable laser targeting system. 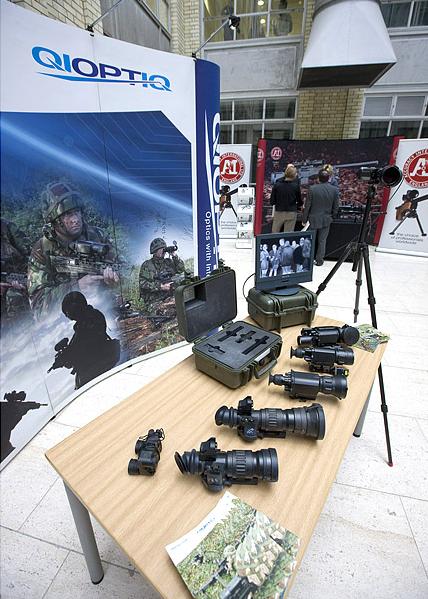 The equipment is procured for British troops by Defence Equipment and Support’s (DE&S’s) Light Weapons, Photographic and Batteries and Dismounted Soldier Systems Teams who are also responsible for the testing of, training on, and through-life servicing (including any required modifications) of, the kit.

“Everyone takes interest in the UORs [Urgent Operational Requirements] and the new equipment coming in for specific purposes, but there’s a whole lot of other activity that goes on, on a daily basis, to maintain and look after and improve the fleet of weapons that we have.

“People don’t quite realise just how much kit we have to manage; and obviously the numbers are increasing all the time, along with the ramp-up in terms of what we’re doing on operations.”

“The small arms market across the world is constantly evolving, and we need to make sure we keep up with that, and we’re at the front foot,” he said.

“We’re well up-to-speed in terms of what technologies are coming along; the use of polymers, ceramics, the changes in the way we configure the weapons, and the adaptability we now have.”

No one piece of kit is as personal to a foot soldier as his or her service weapon; it is what defines them and will protect them during battle. 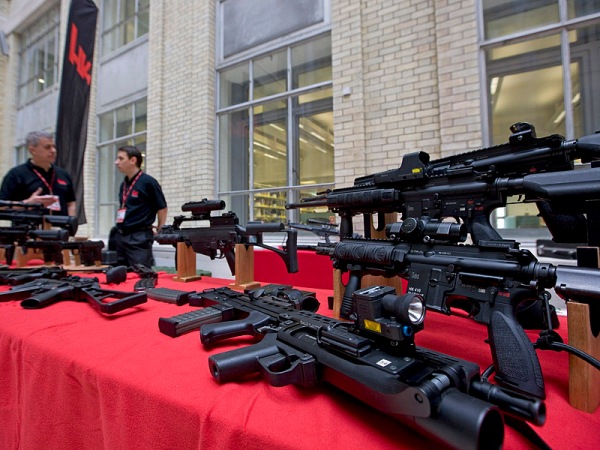 The DE&S teams recognise this, working closely with Service personnel to develop their weapons, and endlessly striving to make improvements, wherever possible, based on feedback received from the end users – the soldiers on the ground.

The main focus of the developments centres around the size, weight, range and accuracy of the weapons, but ergonomics and customisability – tailoring a weapon to the individual – is the direction that the teams are increasingly working towards.

The DE&S teams use weekly reports from Afghanistan and debrief sessions with recently-returned units to gauge the effectiveness of their efforts as well as any areas for improvement. 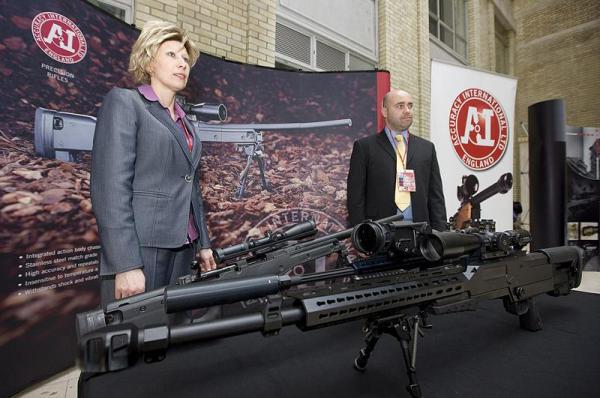 Major Toby Barnes-Taylor, Chief of Staff of the Individual Capability Group, explained how feedback received from front line troops in Afghanistan today is directly influencing the evolution of their weapons:

“In the unique perversities of theatre, where you are going out for extended periods of time, the soldiers get tired. A man will happily operate for eight, 10, 12 hours, but when you ask him to do 18 to 24 without moving, things start to ache.

“We found that with the integration of the SA80 rifle with the helmet and body armour that is used in theatre, the soldiers, after many hours, found that their wrists started to ache chronically and they couldn’t get a stable fire position because of the normal foregrip.

“Therefore we went out and procured what is known as a Picatinny rail quad rail, which replaced the entire furniture at the front of the rifle, and, with a down-grip, looks like a gangster grip out of the 1940s movies, so that essentially totally alters the dynamic of how the soldier holds it and gives his arms greater chance to rest and therefore work better for longer.”

The team uses the latest Computer Assisted Design (CAD) packages and a dedicated Human Factors Interface Team to swiftly evaluate every proposal, ensuring any modifications are scientifically implemented to integrate with existing kit, and will have maximum benefit to the end user.

Staff got a chance to get their hands on the new Combat Shotgun from Beretta. [Picture: Harland Quarrington, Crown Copyright/MOD 2010

Maj Barnes-Taylor says that his team’s dedication and professional ethos are mirrored in their business partners:

“Together with the MOD, the traditional Defence industrial partners, such as those we have here today, are utterly unified in their overall desire to support the man on the ground; so they are as keen as we are to find any solution to any issue that is raised.”

One of the weapons on display was the recently unveiled L129A1 Sharpshooter rifle, the first new infantry combat rifle to be issued to troops for more than 20 years.

Once again, its introduction, under a UOR, was a direct response to meet the requirements of battlefield commanders on the front line in Afghanistan:

“The standard rifle has an effective range of three to four hundred metres, and we now find that, because of the terrain and environment, and the Taliban, that the threats can stem from 20 feet [6 metres], all the way out to 900 metres plus, in the direct fire of a contact battle,” said Maj Barnes-Taylor.

The Sharpshooter’s considerable range takes it into the realm of sniper territory, but it requires far less training, being more similar to the standard service rifle than the highly-specialised weapons used by those in the sniper profession:

“The Sharpshooter rifle is designed for a generalist soldier who is a good shot, so it is designed far more for a man to be able to switch his weapon and use it without months of specialist training,” said Maj Barnes-Taylor. 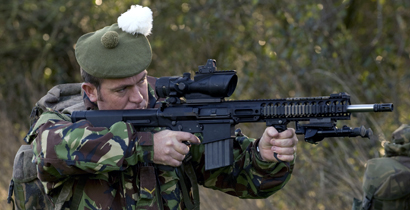 “Therefore, we have to ensure that general soldiers, those who are not specially trained, who have not gone through the months of sniper schools, have a weapon that can defeat an enemy up to that range, and this weapon is designed specifically to do that.”

One of the best-established weapons on display was the formidable .50-calibre heavy machine gun.

Usually mounted on a vehicle, such as a WMIK Land Rover or Jackal, the ‘50 Cal’ can knock holes through the thick compound walls found across Afghanistan with ease.

“In the old days we had a standard barrel, and it could take 10 minutes for a barrel change … the quick-change barrel cuts that 10 minutes down to just 10 seconds,” he said.

In the midst of a firefight, that sort of improvement could change the outcome of a battle, potentially saving the lives of British troops on the front line.

Filed under Advanced Soldier Technology and Systems, Arms and Ammunition